The Sad Tale of Fred the Fringe

Listen to Jonathan read his poem ...
I knew a lad called Freddy Winge
who grew the most prodigious fringe.
The fringe restricted Freddy’s view
so where he was, he never knew.

Because his hair got in the way,
he’d bump his nose ten times a day,
he’d blunder through a hairy fog,
trip over both his cat and dog

and often lose his way to school,
to end up somewhere else, the fool.
Young Freddy’s dad could plainly see
it might end in catastrophe. 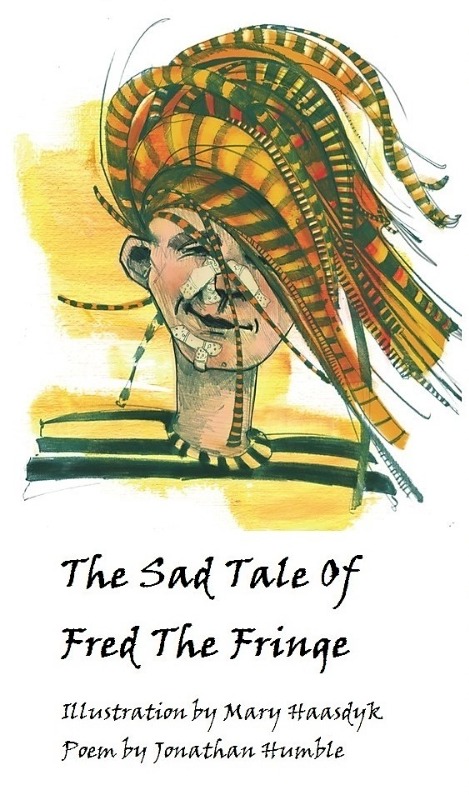 A point repeated by his mum,
who told Young Fred his fringe was dumb.
But Freddy thinking he looked cool,
would not alight the barber's stool.

He carried on, did not think twice,
ignored his parents sound advice.
He bumbled on with scarce a care,
preoccupied by his long hair.

Until upon a summer’s day
calamity came Freddy’s way;
whilst by the coast with mum and dad,
a sad thing happened to this lad.

For walking by the cliff top ledge,
poor Freddy strolled right off the edge.
A soggy end he now abides,
as with the fish he now resides.

So take advice about your hair
and when atop a cliff beware;
go cut your fringe or just like Fred,
a hairy time might lie ahead.
About the illustrator: Mary Haasdyk is a Calgary-based illustrator, working in editorial, publishing and public art. She brings a fresh perspective with her emotive and playful illustrations, and enjoys the challenge of finding unexpected visual solutions. Her work has been recognized by Spectrum Fantastic Arts, American Illustration, Society of Illustrators West and Applied Arts.
This poem and illustration first appeared in Stew Magazine
This poem is copyright (©) Jonathan Humble 2023