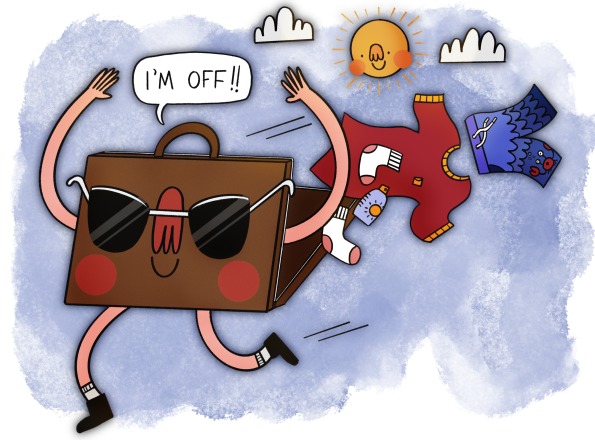 Next trip you take
you’re in for a shock
I may be quiet
shut tight with a lock
But while you’re out
enjoying the sun
I’ll escape
I’ll be on the run
A suitcase on the move
looking for fun.
I’ll be that suitcase
Yes, that’ll be me
I’m a suitcase
who wants to be free.
About Michael Rosen: Michael grew up in the London suburb of Pinner. His parents were teachers, great storytellers, readers who went on to become university lecturers. As an adult, Michael has been a freelance writer, teacher, journalist, performer, broadcaster and university professor. He loves football and is a passionate supporter of Arsenal FC. He has written and edited over 200 books for both children and adults. He is well-loved in schools by pupils and teachers for his wonderful stories and poems which include Quick Let's Get Out of Here, Little Rabbit Foo Foo and the classic We’re Going on a Bear Hunt (with Helen Oxenbury). In 2007 he was appointed Children's Laureate, a role which he held until 2009. While Laureate, Michael set up The Roald Dahl Funny Prize which later became the Laugh Out Loud Award (the Lollies). Michael and his son Joe have created a YouTube Channel - 'Kids' Poems and Stories with Michael Rosen' which has had over 100 million views. His latest book, published by Ebury Publishing, is titled Many Different Kinds of Love: A story of life, death and the NHS.
His website is michaelrosen.co.uk

Michael has written and edited many books and has been a freelance writer, teacher, journalist, performer, broadcaster and university professor. He loves football and is a passionate supporter of Arsenal FC.