Our newest feature on the Dirigible Balloon looks at individual poets whose work has captured our imaginations and set the bar of quality incredibly high.

Back in October 2021 we were very lucky to have three poems submitted by Moe Phillips, a poet from the United States, each one accompanied by wonderfully produced sound files and read by the marvellous media artist Namakula Nasejje Musoke. We were so happy to upload Moe’s work on that November flight.

Moe Phillips is a poet, writer, producer of wonderfully creative work and member of the Society of Children's Book Writers and Illustrators (New York City chapter).

Born in New York, Moe lives with her photographer/producer husband Ian in the sleepy town of Lambertville, New Jersey. Moe is a believer in all things magical. She credits her Irish ancestry for her love of words and wonder.

On the towpath and woodland areas of Lambertville, Moe and Ian have created fifteen fairy doors. Moe’s project was dreamed up during walks along the canal with her dog, which reminded her of the enchantment she feels in Ireland, where her family ancestors lived. These fairy doors are Moe’s poems brought to life; a vision conjured up from her imagination and a place where dreams can come true.

Whether Moe is delving into the world of Fairy folklore, writing silly poems or essays about daily living, she uses simple storytelling language with great focus.

Over twenty of Moe’s poems and essays have appeared in anthologies and magazines for adults and children, including amongst others, essays and inspirational pieces in Bella Grace Magazine and poems in The Caterpillar Magazine. Moe’s latest poetry endeavour is a tall tale series of audio stories entitled The Feisty Beast available on Youtube.

As an advertising executive producer, Moe has won numerous awards for her contributions, including a Gold Clio for Disney’s “Little Mermaid” 30th anniversary tribute film.

The quality and creativity within her work has shone through here on the Dirigible Balloon, which has been lucky enough to upload several of her poems and recordings such as The Lady in the Hat, The Octopus Tango, Winter Fairies and her latest poem Mortimer The Dragon, which is posted here for your delight …
Mortimer the Dragon
by Moe Phillips

Listen to Namakula read Moe's poem ...
Champion of a thousand fights,
Gobbler of a thousand Knights.
One day a Dragon met his match,
when it was a Fairy, he tried to catch.
He spied her from his perch on high.
Decided he would make her fry.
Mortimer snorted smoke with glee.
He’d dunk this wench in his tea!
An afternoon’s toothsome bite,
would quell his Dragon’s appetite.
Crush her bones in iron claws.
Munch her in his smoking jaws.
Mortimer prepared his strike,
his tail unfurled. A pointed pike.
Poised to plunge his deadly dart,
into the Fairies beating heart.
What this dragon didn’t know
about his fair prey down below,
this Fairy was a Warrior Elf
who knew the art of war herself.
Down he dove at this small sparrow,
wings clove the sky like an arrow.
Mortimer spewed a cloud of ash.
“Blind the imp! Make her crash!”
The Fairy zig -zagged just in time,
heavenward she began to climb.
Mortimer roared! Picked up speed.
Vowed to make this maiden bleed.
The Fairy spun in mid-flight,
inches from that blazing bite.
Pulled a sword from her side,
“Come now Dragon take a ride!”
Mortimer felt a pang of fright.
He wanted a snack. Not a fight.
The sky answered the Fairy’s call.
Sweet blue turned to inky squall.
Roaring thunder clapped and clashed.
Sizzling bolts of lightning flashed.
Cruel Mortimer drew in his breath,
his next exhale…scorching death!
Mortimer prepared to do his worst.
She cried “A drink for that thirst!”.
Swung her steel with all her might,
sword crackling with silver light.
Blade slashed the seething clouds,
shredding their grey woolly shrouds.
Mortimer realized far too late,
this battle would now seal his fate.
Before the worm could spread his ire,
the deluge quenched his Dragon fire.
He’d been beaten in this joust.
Dragon flame forever doused.
Off he raced to meet his doom.
His mountain home now a tomb.
Sealed in his cave, there he lies.
Escape? He never even tries. 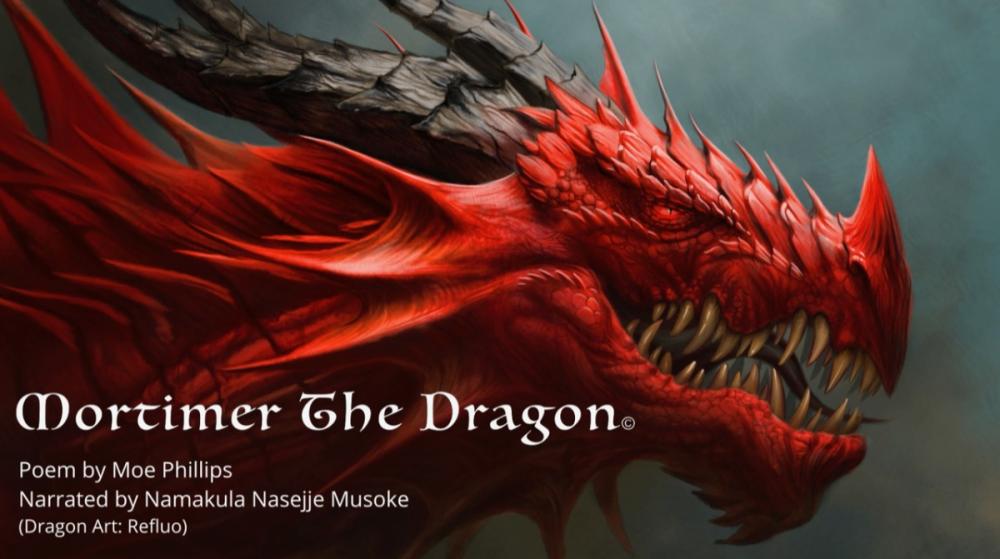 Article written and organised by Jonathan Humble of the Dirigible Balloon ...
With our sandwiches packed
and our bottles of juice,
under fluffy white clouds and the sun,
we all climb aboard
this balloon of delight
in a search for new places and fun ...

This poem is copyright (©) Jonathan Humble 2023